Chile is recognized by world investors thanks to its large mineral reserves, its energy potential and for being one of the 15 leading food exporting countries on the planet. 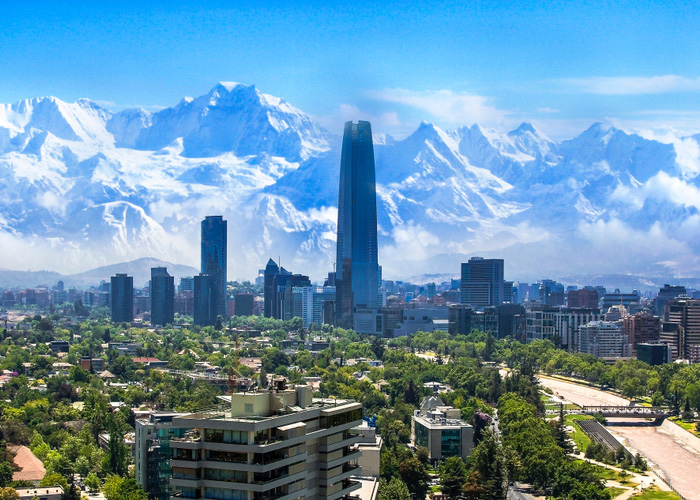 Chile is recognized by world investors thanks to its large mineral reserves, its energy potential and for being one of the 15 leading food exporting countries on the planet. This has been achieved through the signing of 26 international agreements and double taxation treaties with 64 world economies, equivalent to 86.3% of world GDP. For example, according to data obtained by the International Trade Center (ITC), this nation in terms of international trade was the 44th largest exporting economy in the world during 2019, with a total of 69,146 million dollars.

Another interesting aspect is the effort of the Chilean government in the design and implementation of favorable policies for companies and investors, such as the enactment of the Framework Law for Foreign Investment (Law No. 20,848). These initiatives have allowed Chile to consolidate a stable, open economy with high standards of competitiveness in Latin America and the best positioned among the world's emerging economies.

On the other hand, the Organization for Economic Cooperation and Development (OECD), has highlighted the good performance of the recovery of Chilean prosperity levels, such as those managed before the health crisis this year, as will Japan, Poland or Finland.

For its part, ProChile the institution of the Ministry of Foreign Affairs in charge of promoting Chilean goods and services abroad, emphasizes the government's current effort to promote and achieve the diversification of exports and the attraction of foreign investment, taking advantage of the country's leadership in the region and the interesting offer in its productive sectors.

Why invest in Chile

The constant work of the Chilean government has allowed the country to be considered as a developed, highly performing and most transparent business environment in Latin America. This is mainly due to the favorable conditions for foreign investment, where Chile has focused on maintaining an open market and competitive economy through the implementation of various favorable policies for companies. Proof of this was the promulgation of the Framework Law for Foreign Investment in June 2015, Law No. 20,848, from which profitable benefits are granted to large investors interested in arriving in the country.

Another interesting initiative was the creation of the Sociedad por Acciones (SpA) that simplified the process of setting up companies, allowing the creation of an entity with a single shareholder regardless of whether it is a natural or legal person and reducing the minimum share capital required to zero.

Additionally, Chile allows 100% foreign ownership and has no monetary controls on the movement of capital. These reasons make expanding a business to Chile attractive and affordable for foreign companies interested in entering the region.

Thanks to Chile's low level of public debt, the health of its financial system and its solid institutions, this nation has become a safe and reliable place to do business. On several occasions, it has been evaluated with high indicators by risk rating agencies such as Standard & Poor's, which gave it an 'A+' in 2017, Moody's gave it an A1 in 2018, and Fitch gave it an 'A' in 2019.

Forbes also qualified Chile on its list as one of the best countries to do business, placing it in 33rd place, highlighting its high performance among other Latin American countries. Additionally, Chile is among the 20 countries with the greatest economic freedom in the world and third in Latin America, according to the Economic Freedom Index 2019.

According The Economist Intelligence Unit, Chile is considered one of the 20 most attractive economies to do business in the world, leading in Latin America in this field. This has been the result of this country's effort to achieve good political and economic stability, legal certainty and openness to trade.

According to the World Bank's Doing Business 2019 report, Chile is located 56 positions above the regional level. In the Global Competitiveness ranking Index 2019 of the World Economic Forum, Chile obtained the 33rd position according to its national competitiveness and the set of institutions, policies and factors that drive productivity in the country, positioning it in the first place among the countries of the region. The high level of free trade in the country is another attractive factor for investors, especially since it stands out as one of the freest countries in the world and the first among the other countries in Latin America.

According to the statements of the Chilean Ministry of Economy, based on the figures obtained by the Central Bank, foreign investment is a vital gear in its economy, for example, in 2019 it received 78% more than the previous year, managing to obtain 10,797 million of dollars. This has been decisive in improving its competitiveness and access to new resources, markets and technological development.

According to the banking body, Spain was the second foreign investor in terms of stock, with 34,643 MUSD, followed by the United States, with a stock of Foreign Direct Investment (FDI) of 35,464 MUSD.

Another interesting aspect is detailed in the report of the United Nations Conference on Trade and Development (UNCTAD) of 2020, where Chile led the issuances of Foreign Direct Investment in Latin America with US $11,600M.

As a member of the Pacific Alliance, the Rio Group, Mercosur, APEC and UNASUR, it remains committed to its resolute policies to promote international trade. For example, Chile currently has 26 international agreements and double taxation treaties with 64 economies, which represents more than 86.3% of world GDP under privileged tariff conditions and provides access to more than 4.3 billion potential consumers. Worldwide. Some of these current economic partnership agreements are with the European Union, Japan, and the P4 countries (Brunei, Chile, New Zealand, and Singapore). It has also signed economic complementation agreements with Bolivia, Ecuador, MERCOSUR and Venezuela.

Chile's economy offers a positive environment that promotes foreign investment in almost all its productive sectors, which is evidence of its great political openness of bilateral, regional and multilateral trade agreements that have consolidated the country as an active international partner and a natural gateway for trade with Latin America and Asia.

According to data obtained by In the 2019 Digital Readiness Index, conducted by Cisco, Chile ranked 34th out of 141 economies in the world and first in Latin America, in terms of its level of readiness to create a robust and profitable digital economy. It should also be noted that it was one of the first 20 countries in the world to include mobile coverage, information and communication technologies and implement them to achieve efficiency in government.

This has earned it to be classified as a connected country thanks to its advanced progress in digital connectivity and information and communication technologies. This great advance in digital networks and telecommunications, similar to that of international powers, shows that Chile easily adapts to new technological advances and is also open to adopting new technologies.

The most qualified human capital in the region

According to figures from the National Institute of Statistics INE, the Chilean population at the end of 2019 was 18,729,160 and 88% lived in urban areas. Chileans are some of the best prepared human capital in the region and this is due to the high levels achieved by the country's universities and business schools. Chile's higher education system is made up of 163 institutions, including 60 universities, 44 vocational training institutes, and 59 technical centers.

According to the Ranking of World Universities (ARWU 2019), the University of Chile ranked among the best 500 in the world in 2019, which shows the quality and global recognition of the country's university education. Likewise, this nation has eleven business schools with leadership positions in the 2019 MBA Ranking, referring to Business Schools in Latin America, three of them being among the top ten in the region.

After Buenos Aires, Santiago, the Chilean capital, is considered the second most liveable city in Latin America and ranked 64th out of 140 cities worldwide, standing out regionally for the high quality of its health and educational services, as well as such as the quality of its water and electricity services.

Also in terms of public security, the country received a high score in the Global Peace Index, ranking 24th out of 163 countries in the world and first in Latin America. The index, published by the "Vision of Humanity Initiative", measures the existence of internal and international conflicts, public security and militarization in 158 countries.

Below you can find some of the main taxes in Chile, if you want to know in detail the country's tax information you can download our Global Taxes App.

Prosperity of the agricultural and forestry industry

Being one of the 15 leading food exporting countries on the planet, Chile offers investment opportunities in fruits and agriculture, wine and derivatives, meat, dairy products, salmon and processed foods.

This sector, which is one of the pillars of Chilean exports and therefore of its economy, is revitalized by the dynamism of its fruit and wine growing, as well as its forestry and agricultural sector. For example, fruit growing has an excellent production behavior, especially that destined for the export of blueberries, cherries and table grapes. Agriculture focuses on the production of annual crops, mainly wheat, potatoes, tomatoes, beets and corn. The forestry sector leads the production of pulpable wood.

According to InvestChile, the country has one of the five macro-zones in the world that have a Mediterranean climate and that, together with its fertile soils, favor its diversity regarding the cultivation of food and animal husbandry.

The organization also highlights its robust trade network, made up of 27 trade agreements signed with 64 markets, which makes it easier for them to reach 86.3% of world GDP with fairly favorable tariff conditions.

Without a doubt, the Chilean energy industry is one of the fundamental gears of the investment, since it has around 47% of the total investment with more than 400 initiatives that generate a value of more than US$ 82,000 million.

According to InvestChile estimates, this country has the best solar radiation potential on the planet, reaching 4,000 hours of sunshine per year in the Norte Grande. Additionally, it has a large wind capacity that supplies its parks located throughout its territory.

The growing interest of international energy companies in the country is due to the fact that solar radiation is really abundant and exceeds the levels reached by countries such as Portugal by more than 30%.

For this reason, Chile is projected to be an epicenter of the energy development of the future, for which it hopes to reach a 70% sustainable matrix by the year 2050.

The Chilean mining sector is one of the most important on the planet, since it is the holder of 22% of world copper reserves, 11% of molybdenum reserves, 5% of silver reserves, 7% of gold and also has 48% of world lithium reserves.

This scenario shows that this nation has a stable, competitive and specialized market, ideal for developing a cluster of suppliers with world-class standards.

Our advisors in Chile

SCK Abogados & Consultores Tributarios is a firm specialized in offering a complete range of tax consulting services for individuals and companies. We have an interdisciplinary team of attorneys and certified public accountant experts in their field. Our partners, who have extensive experience in international audit firms, provided the framework to create a consolidated team focused on excellence and client service.